The first observed reference to the notion of "Aliens versus Predator" is in the movie "Predator 2" when, during the final confrontation in the Predator ship, we can see the Hunter''s trophy wall bearing an unmistakable alien skull (polished to perfection).

Bringing together the two most dangerous xenomorphs in movie history was a stroke of genius, but placing amongst that elite company us humans, signalled a vicious streak that must have surfaced early in the game''s design. 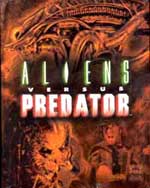 Each of the alien species when singled out presents a virtually insurmountable obstacle to our survival, whilst their simultaneous presence in a human-occupied area spells doom and havoc on an un-imaginary scale, as each xenoc possesses very specific (and very effective) killing techniques, and (what''s more important) considerable survival potential even when subjected to extensive human weaponry.

We, humans must face the crawling, hissing mass of aliens, whilst constantly expecting to be speared, cut, dissected, or simply blown apart by the invisible, stalking Predators. Those are not the odds that our species prefers, as we have proven time and time again in our history. With the tables of survival turned, we resort to panic, extreme ammunition expenditure, a lot of shouting, screaming, weeping, and finally... death. Death without class or style, a death of a weaker and conquered animal that we really are, when confronted by either of the two vastly superior alien killers.

The crew at Rebellion, a UK software development company who made Aliens v Predator for Atari Jaguar in 1994, got drafted in by Fox to create a masterpiece. Whatever dungeon Fox locked them into, must have been a powerful motivator, because Rebellion created a mind-blowing game.

In all honesty- it’s close to non-existent. But, when playing each of the levels you are too scared, too preoccupied (with surviving), and too busy (shooting at anything) to notice.

Brief: Three linear storylines about something…

You’re the last of whatever was there before (platoon, division, army). Your ‘friends’ and unit ‘buddies’ have left you behind as they (so thoughtfully) evacuated. Now, you must catch up or escape on your own. How?? Logically, through the most alien infested parts of the compound.

Oh, I forgot to mention- there are hundreds of aliens crawling through the corridors, staircases and air ducts, slowly turning the buildings into a Hive (so familiar from the final scenes in the movie “Aliens”). They want you. No, not to host their chestbusters. They simply want you dead.

As you run through the various levels, your (ex)colleagues (after all they did leave you) yell advice at your sweaty self from randomly hanging monitors, urging you along, giving you much un-needed advice, and generally trying to convince the player (you) that there’s something more going on, other than your “Lone Gunman” adventure.

You wake up. It’s dark. You have a mission. Kill everything that’s not from your species. Always.

You’re stranded (sound familiar?). Only way to escape- get to your scout ship. How? Through all the levels, killing everything in your path, be that human (pronounced "Ooman") and alien (pronounced "kainde amedha"- hard meat).

Three independent survival/kill-everything storylines interlinked by one commonality- levels. All three adventures happen on the same levels, although the level line-up is varied for each species, throwing your senses off balance once you switch from alien to Marine or Predator and vice versa.

Each species begins from a different area on the map, enhancing the experience and providing a nice collection of viable tactical alternatives.

All copyrights and trademarks belong to their respective owners. This site is for the promotion of selected material, no infringements are intended. All reasonable efforts have been taken to credit the respective owners and/or authors.